Asia was the future, and this is what it would look like. For a while, perhaps even still, it held true. The question is: which Asia? South Korean Smart City futurism? Colossal Chinese ghost cities? Drowning the sorrows of a 20-year deflationary recession in Tokyo’s Shinjuku?

Cyberpunk’s aesthetic vision was so ingrained in what our idea of the future would become that we almost missed it as it passed us. Never has this been more evident to me than when I went to see cyberpunk’s newest big budget, big screen incarnation, Blade Runner 2049, in the heart of South Korea’s bustling Gangnam district. As the sun went down and the neon came on, lasers started to spray colorful jets of light into the sky, a giant digital clock on the side of an office building ticked away the hours of the day, and the advertising screens unscrupulously pushed the latest skincare products into the minds of the unsuspecting public. ‘Very Blade Runner’ was the first thing that came to my mind. How strange it is when elements of fiction bleed into reality. 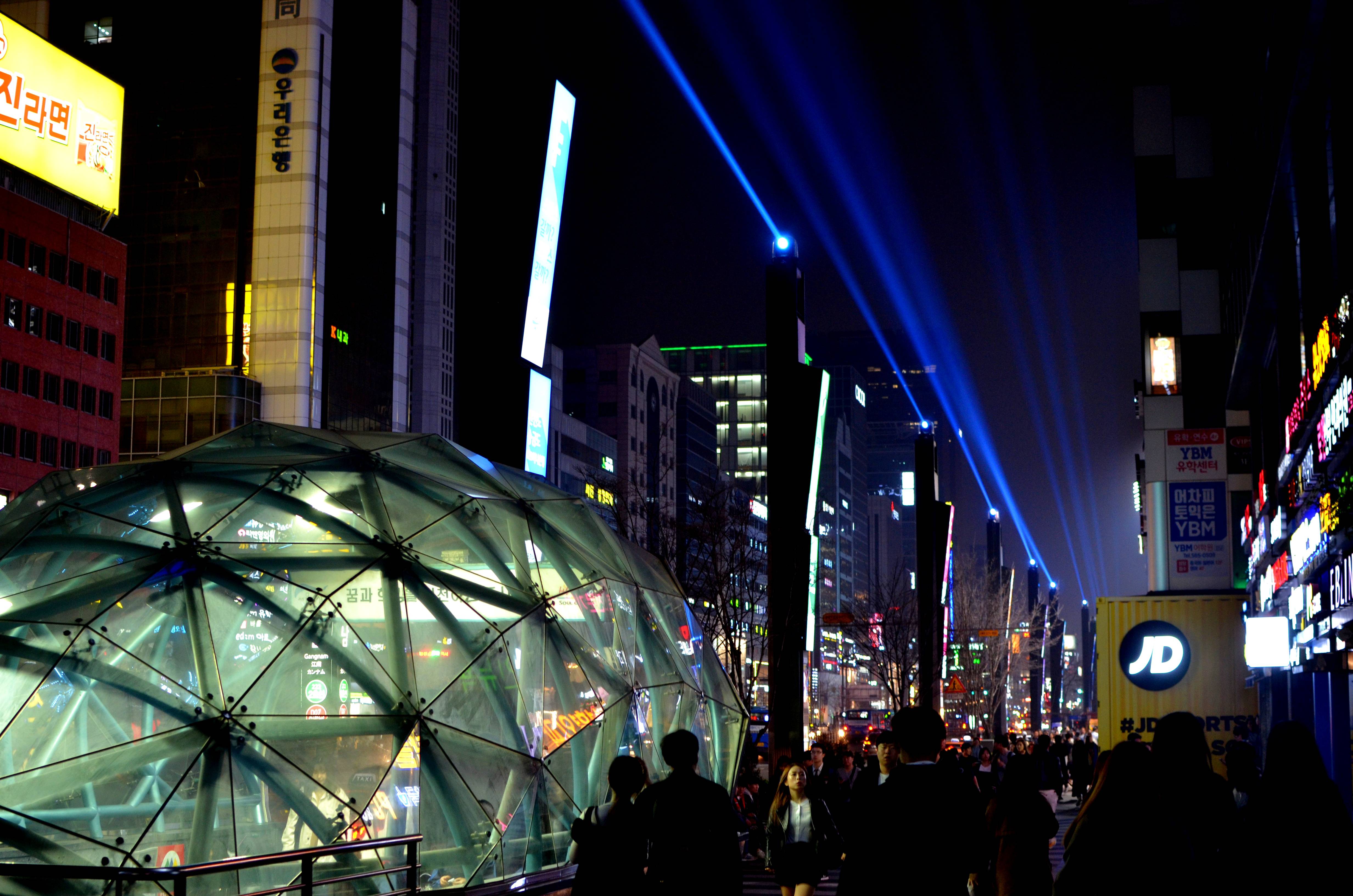 Blade Runner and futurism had become so intertwined that it was, and still is, commonplace to hear the film’s title in adjective form; describing something as looking or feeling ‘Blade Runner’ had become synonymous with ‘futuristic’. However, the irony was that Blade Runner’s future was now our present. Or even more bizarrely, in 2017 when Blade Runner 2049 was released, the dystopian vision of the original movie should only have been two years away. Walking down the streets of Seoul we can see that, in one sense, the present we live in has perfectly lived up to the future that Ridley Scott envisioned, yet in another, the world has become an entirely different place, a place where the cyberpunk visions of the future are starting to become relics a bygone era.

When arriving in Seoul it’s easy to see how we could recognise William Gibson’s idea of an unevenly distributed future. The shining skyscrapers adorned with giant video screens and the holographic bus stops could all be pulled straight from a cyberpunk movie. However, what gives Seoul a certain futuristic edge over traditional cyberpunk is the complete integration of technology into every facet on modern life; integration which has a degree of subtlety and ubiquity that couldn’t have been imagined in the 80s or 90s. (Gibson himself has joked that young readers would probably assume that the complete absence of cellphones must be a key plot point in Neuromancer.) And in Korea, the home of Samsung, and possibly the most tech-literate nation on Earth, this may ring even more true. Seoul is a place where it’s not only the young who are captivated by the latest technology. You will often see senior citizens on the subway engrossed in the latest portable MMORPG on their brand new Samsung Galaxy S9, indifferent to the retroscopic TV screens flickering through the windows of the subway carriage. In the modern era, the future has become mundane. 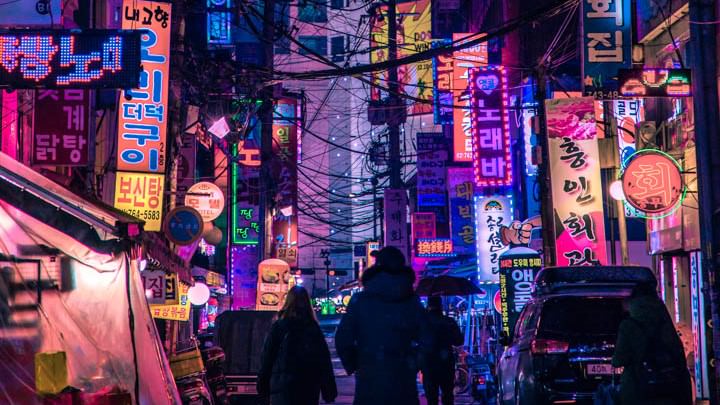 These facts of daily life in Korea have led expat photographers such as Noe Alonzo and Steve Roe to deploy their own vision of what we could call “CyberSeoul”, a throwback to a cyberpunk vision of the past but adapted to the 21st century; a world where the blue and green filters of the cyberpunk era are blended with a spectrum of neon lights. Yes, these pictures are haunted by images of future past in the same way that modern Tokyo is, but they also present us something new. They present us an Asian projection of the present that combines images of the past and future to show us how alien, yet familiar this modern world is. Analysing Alonzo’s work we can see the progression of a cohesive vision: it develops from a body of retro sci-fi images to a totally new and contemporary reconstruction of present day Korea.

Similarly, urban planners, architects, and designers that have witnessed the cyberpunk past have started to use their influence to morph and adapt the future into something that is more fitting for the 21st century. Zaha Hadid’s beautiful Dongdaemun Design Plaza, opened in 2009, is a perfect example of the precedent that cities like Seoul want to set. Certainly, there are still elements of cyberpunk that shine through in Hadid’s work (as we can see in the featured image at the top of this article), but the fact that the Seoul Metropolitan Government was willing advocate the construction of a huge a monument of smooth curved aluminium, illuminated by thousands of glittering lights which blends seamlessly into the city’s labyrinthine neon alleyways, shows us that we’ve moved beyond the world of Blade Runner into something entirely different. We are now living in a post-cyberpunk world. We’ve moved into cyberpunk 2.0. 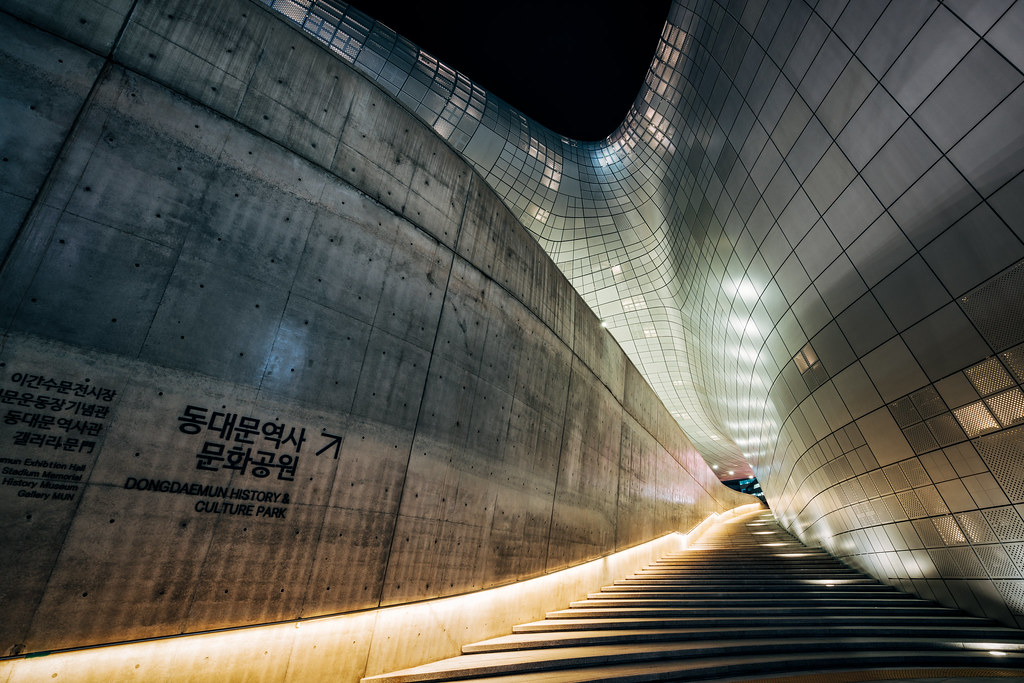 However, if we travel travel to the Japanese mega cities of Tokyo and Osaka, the original homes of everything cyberpunk, they still carry a certain sense of wonderment, and to western eyes, an unshakable air of familiarity. Yet, with their 80s style railway carriages, physical paper tickets, and mandatory cash payments, we get the impression that these cities are starting to feel like places out of time; like spectres of the future haunting us from the past. Jacques Derrida referred to this concept as hauntology. As he states in Specters of Marx, “To haunt does not mean to be present, and it is necessary to introduce haunting into the very construction of a concept.” Japan has therefore been haunted by a future left to it during a time of prosperity which is now long gone, whereas Seoul, and many other newer Asian cities are not limited by the same constraints. They are picking up their visions of the future from where Japan left off.

This is not to say that Korea totally escapes the tropes of the cyberpunk past. In fact, where William Gibson may have been worryingly prophetic is in regards to Korean corporate structure. Much like the neo-Japan from Neuromancer, the Korean economy is inherently controlled by a select few multinational conglomerates known as chaebol. The chaebol are eerily similar to Neuromancer’s zaibatsu in both name (the words have a shared etymological origin; they are from the same hanja/kanji) and structure. Colin Marshall notes that “Enthusiasts of cyberpunk, attuned to its essentially dystopian nature, will also quickly take note of how Korea seems to have taken the genre’s convention of a few mega-corporations running the show as its economic model. True Korean corporate loyalists can buy just about everything — food, entertainment, healthcare, car, home, and much else besides — from the same conglomerate, or chaebol.” Many of these names, Samsung, Hyundai, and LG, would be familiar to western readers, and many have far surpassed the wealth and global influence of their Japanese equivalents. 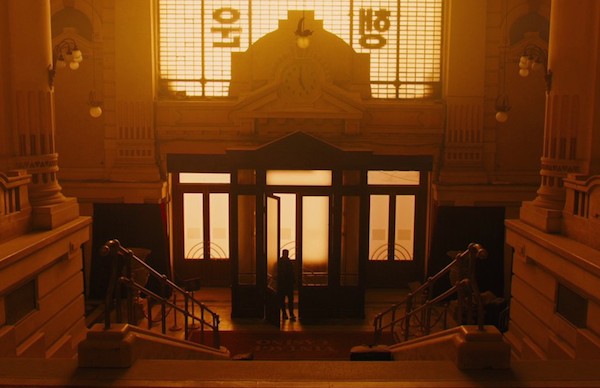 It should be of no surprise, then, that during a famous scene in Blade Runner 2049 we see officer K entering a dilapidated building with the Korean word 행운 or “good luck” emblazoned across the windows. K’s search for Deckard in this 행운 hotel is a perfect reminder that the ubiquity of Japan’s influence has slowly been adjusted since Deckard’s time 30 years earlier. In fiction as in reality.

But let us remember, the Korean vision is just one of many, the most influential of which will, perhaps, be that of China. Seoul is a smart city that integrates elements of various different kids of futurism, but if we continue east and journey south down the south China sea we encounter cyberworlds of a whole different nature. From Shanghai to Guangzhou the rapidly accelerating development of the new Chinese mega-cities has produced a world drastic of contrasts. In my next post we’ll examine how, as accelerationist philosopher Nick Land states in his seminal work ‘Meltdown’: ‘Neo- China arrives from the future.”

3 thoughts on “Cyberpunk 2.0: Re-imagining the Future”