French comic book artist and illustrator Jean Giraud (1938-2012), aka Moebius, has had, perhaps, a more profound influence on the contemporary imagination than any other artist working in his field in the 20th century, yet many people will have never have heard his name. From his early work on cult French comic book Blueberry, to the acclaimed Garden of Edena, Moebius has worked behind the scenes on some of the most important and critically acclaimed pieces of science fiction and fantasy of the 20th and 21st centuries. He has directly contributed storyboards and concept designs to the films Alien, Tron, and The Fifth Element, and his work has also been in the inspiration behind all time sci-fi classics such as Star Wars, and Blade Runner, as well of as the fantastic works of Hayao Miyazaki.

However, Moebius’ influence reached further than science fiction. Ever since he spent a year of his youth visiting his mother in Mexico, Moebius had been fascinated with the mystical and the world that existed beyond the realm of conscious thought. Crossing the great expanses of open terrain that he encountered in the deserts of Mexico became, to him, a sort of ritual for the mind that exposed it to previously unimaginable ways of perceiving the world. To Moebius, “Crossing the desert was a sort of initiation. Hours and hours of flat terrain, brilliant sunshine, interminable blue, a hot white sky. It was magnificent. It was something that really cracked open my soul. To a point that I still get great pleasure from drawing situations where people find themselves in the middle of the flat desert. … It was a very jarring initiation. The result of all that was a very strong curiosity for the world of the unconscious and the parallel universe of dreams. It became the impetus for my work. From that moment on, Moebius became my way of exploring the unconscious.”

During the 70s Moebius struck up a friendship with radical filmmaker Alejandro Jodorowsky who, at that time, was most famous for his psychedelic masterpiece The Holy Mountain, and his ‘demented peyote western’ El Topo. Jodorowsky asked Moebius to become the leading designer behind what became ‘The Greatest Science Fiction Movie Never Made’, Alejandro Jodorowsky’s Dune. Moebius and Jodorowsky made a team that were exceptionally well equipped to deal with the waterless world of Dune as both had a strange fascination with the desert, and through this shared interest Jodorowsky introduced Moebius’ to a variety of esoteric and mystical teachings. As Jodorowsky once quipped of Moebius, “You can see it in his work. His shamanic side comes from there. His search in the desert and all that. These magic characters they don’t come from France, they come from Mexico.”

Many of Moebius’ most influential stories, including his famous comics Arzach and The Airtight Garage from France’s Metal Hurlant magazine, have taken place in a desert setting, but it’s his 1999 work 40 Days dans le Désert B (40 Days in the Desert B in English) that most fascinates me. 40 Days is a staggering work unlike any other I’ve seen. Moebius transports you to a desert world where each page slowly shifts through a kaleidoscopic mindscape inhabited by strange beings, and even stranger creatures, constantly morphing and changing like the visions of psychedelic trip. This is Moebius stripping back the limits of the comic book medium, revealing a pure explosion of unconscious creativity.

To read through the whole of 40 Days is to experience a strange sense of déjà vu. There are no words, no colours, and seemingly no narrative, yet this is precisely what makes the artwork that Moebius produces here so uncanny: it reveals something about the inner workings of the mind in the same way that psychedelic drugs and dreams do. The images here seem extremely alien, yet at the same time strangely familiar. To me, it’s unquestionable that this book was inspired by Moebius’ experiences with peyote, and the religious overtones of the temptation of Christ are evident from the title. This desert is a psychedelic dreamscape that truly shows, as Jodorowsky pointed out, Moebius’ shamanic side. Moebius, the artist, or the shaman, will just point us in the right direction, it’s our job to walk the path ourselves. 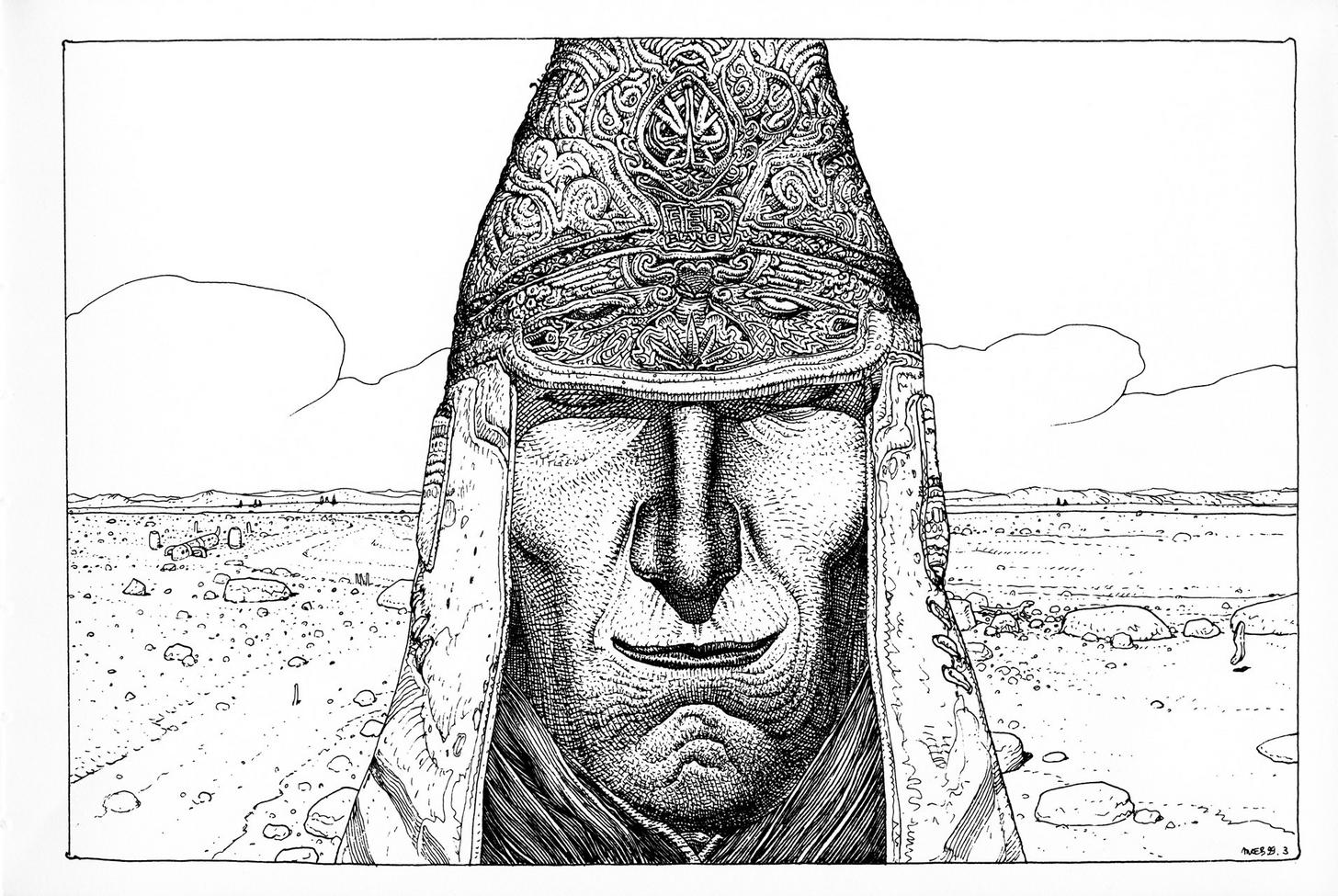 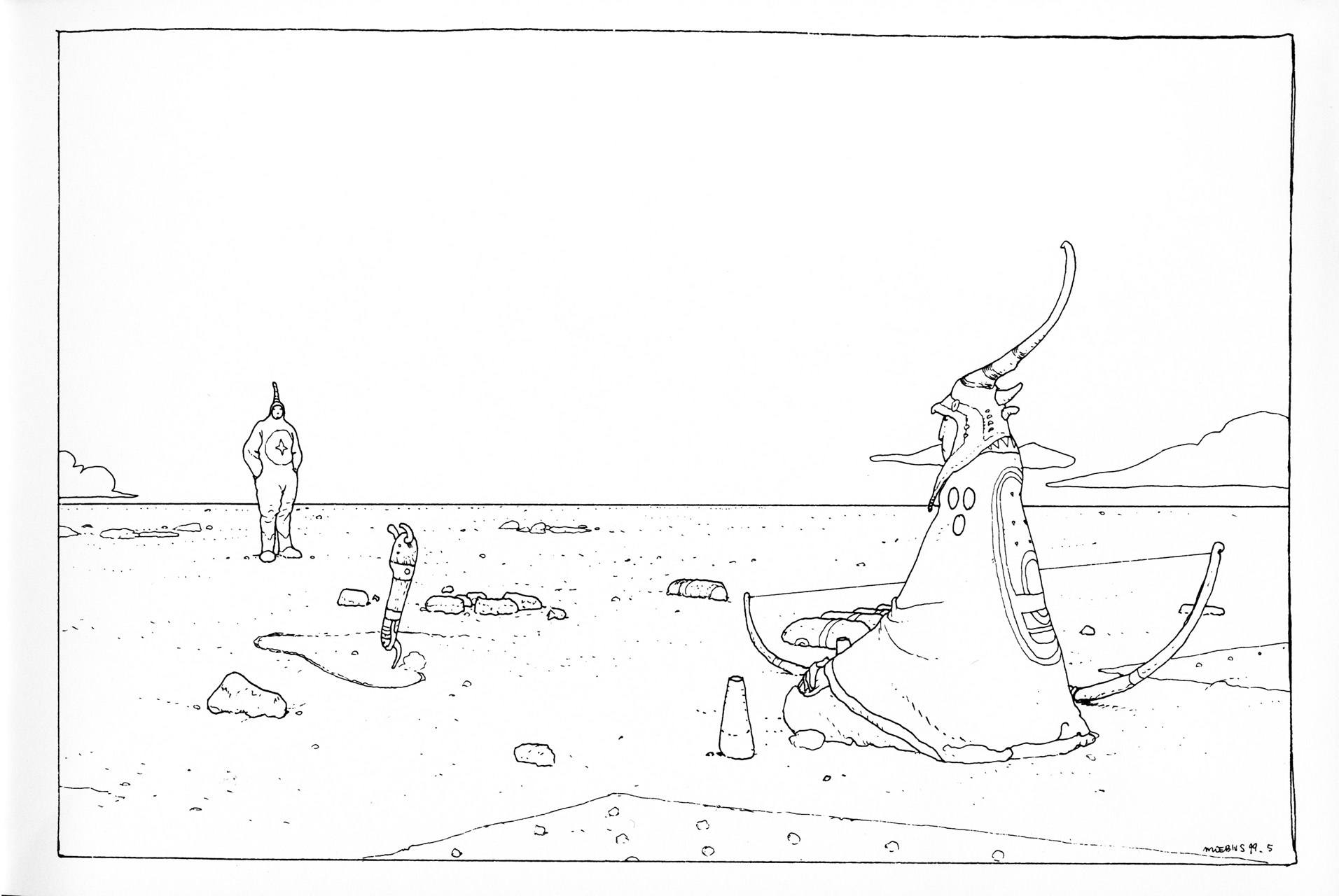 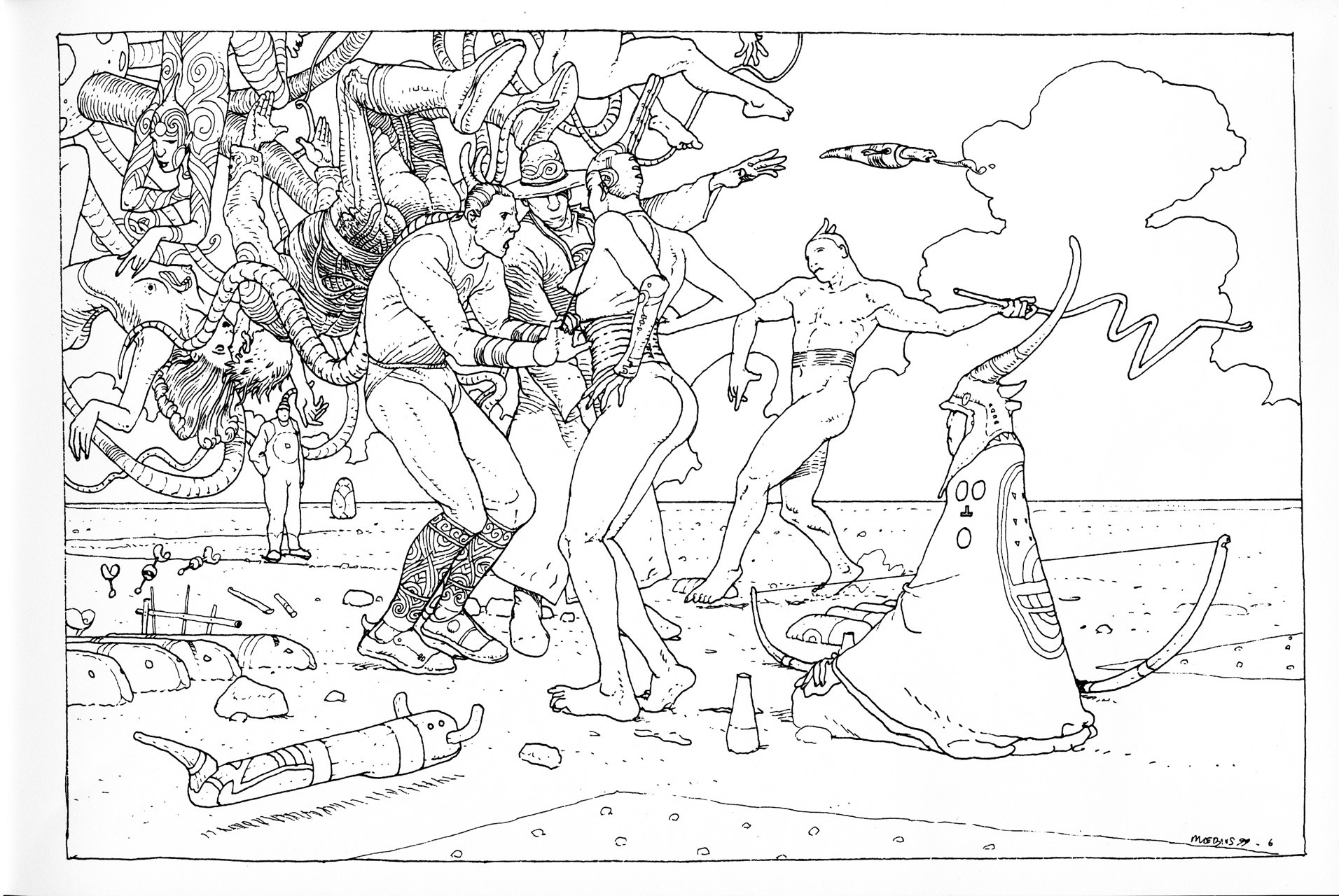 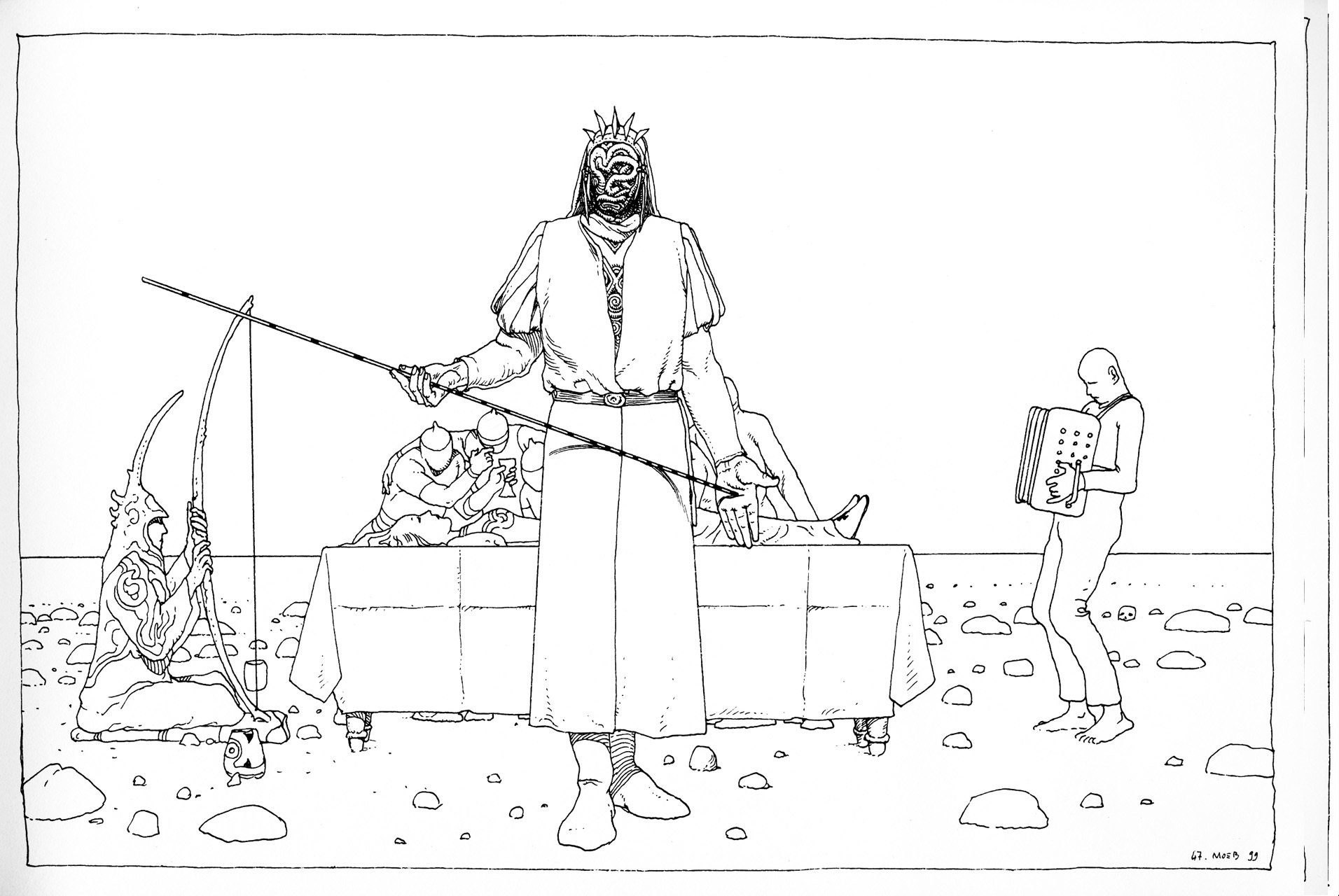 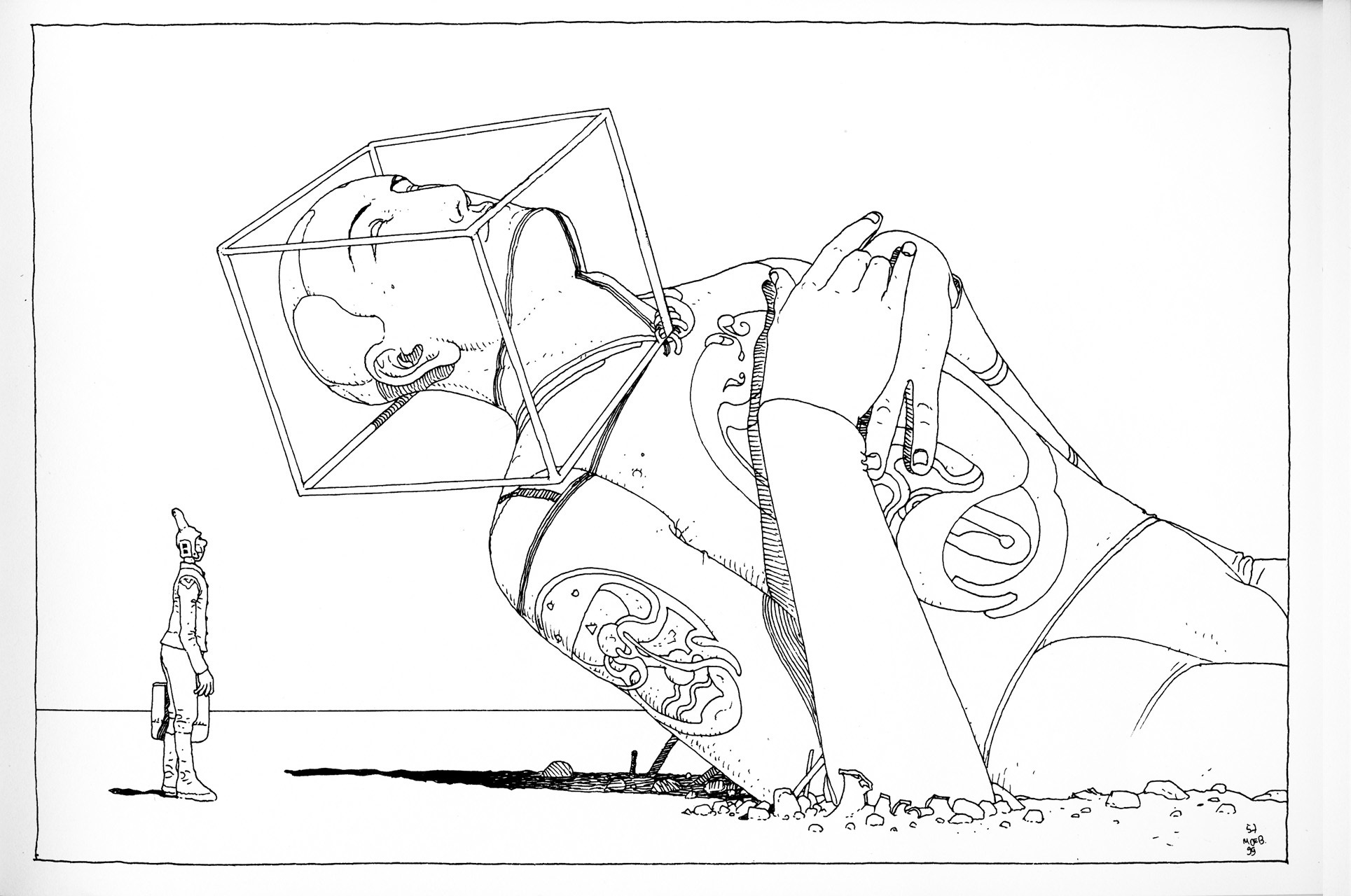 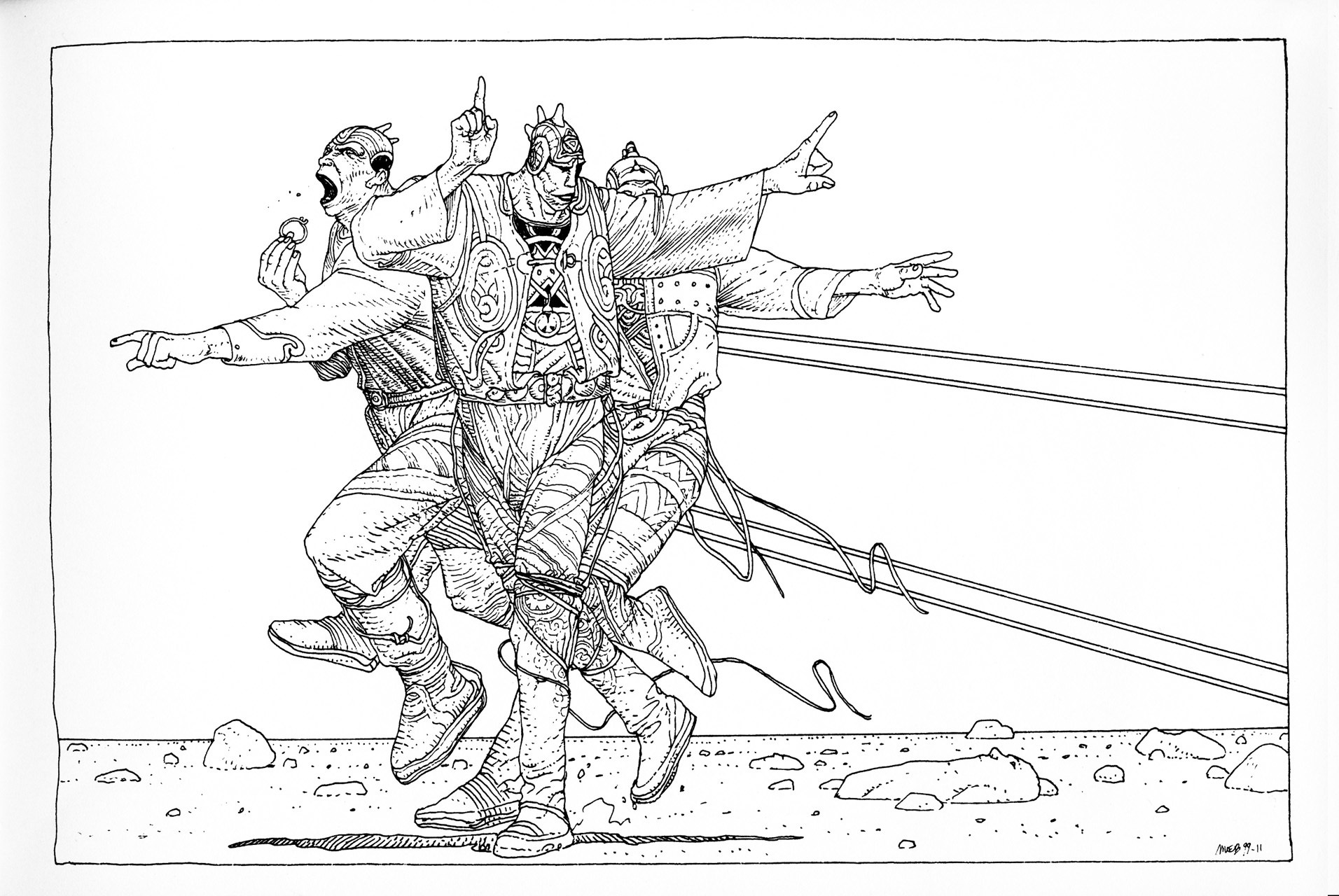 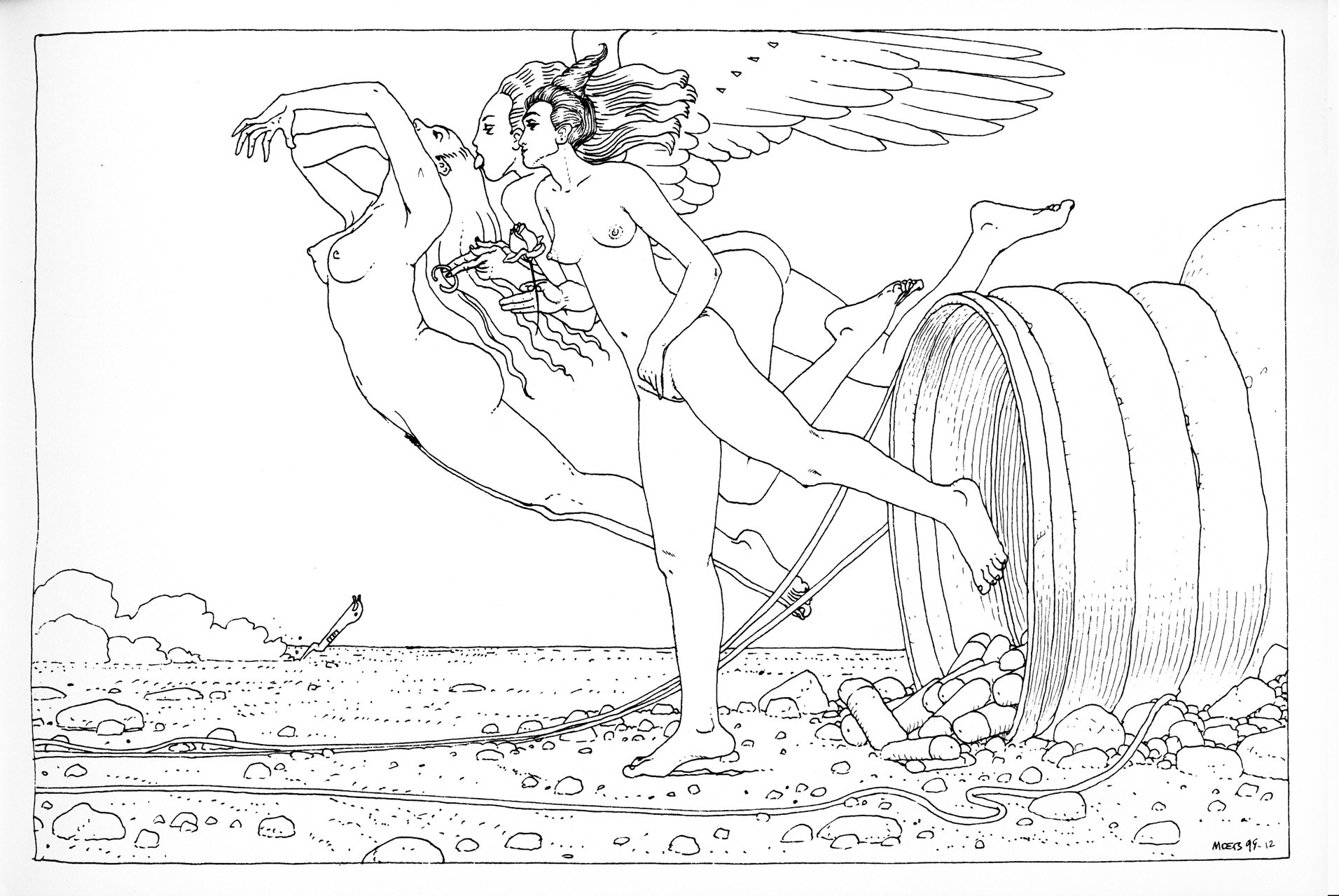 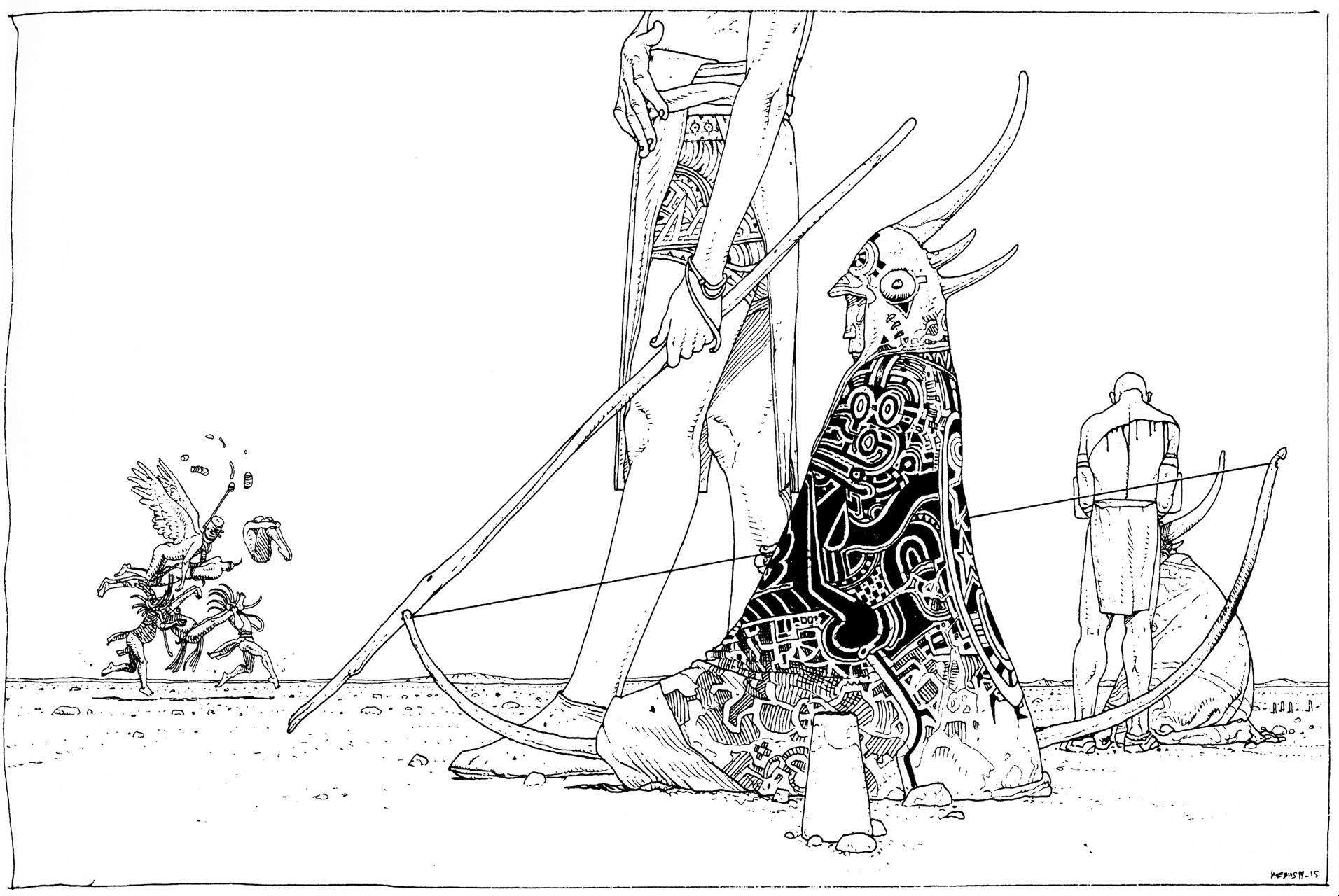 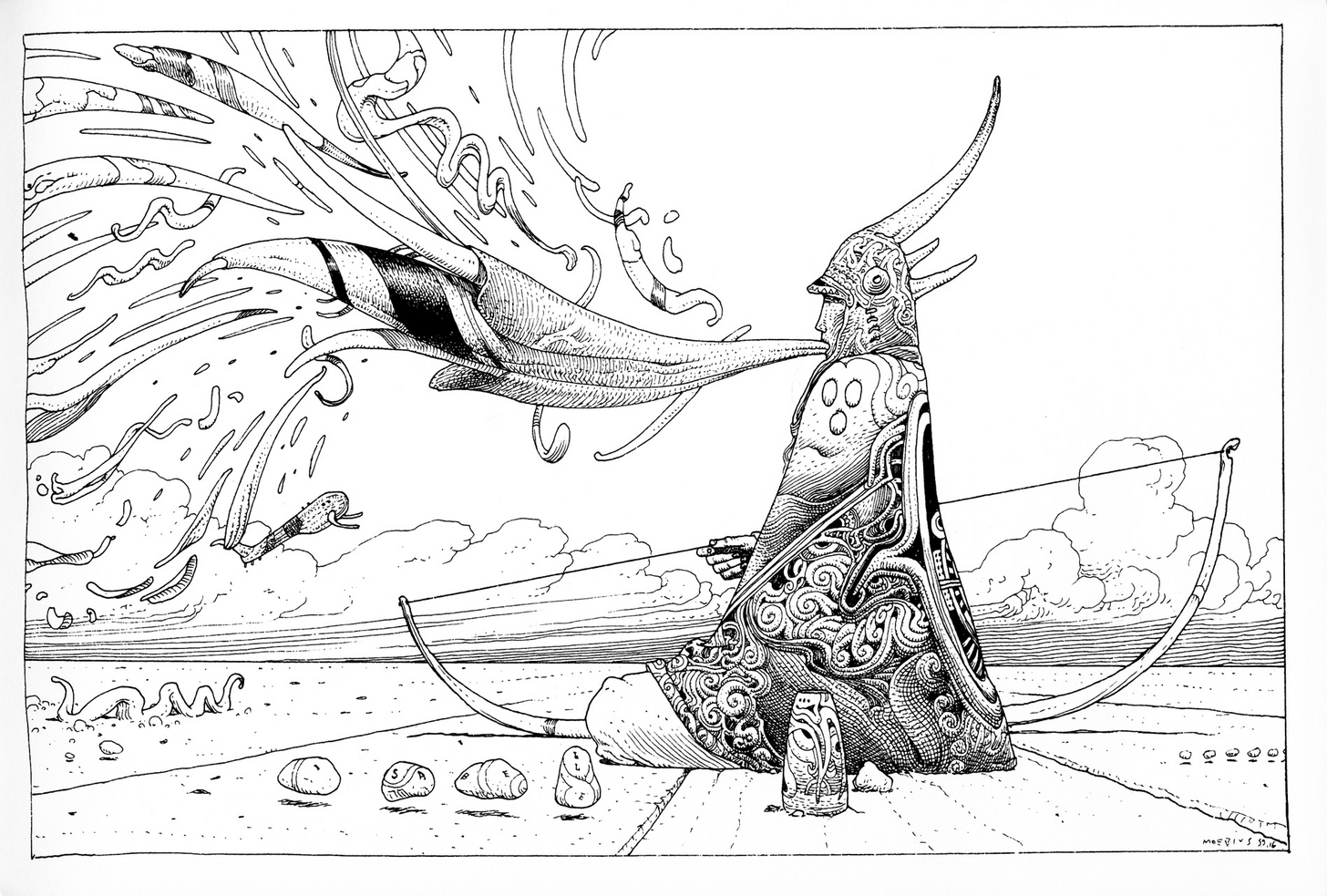 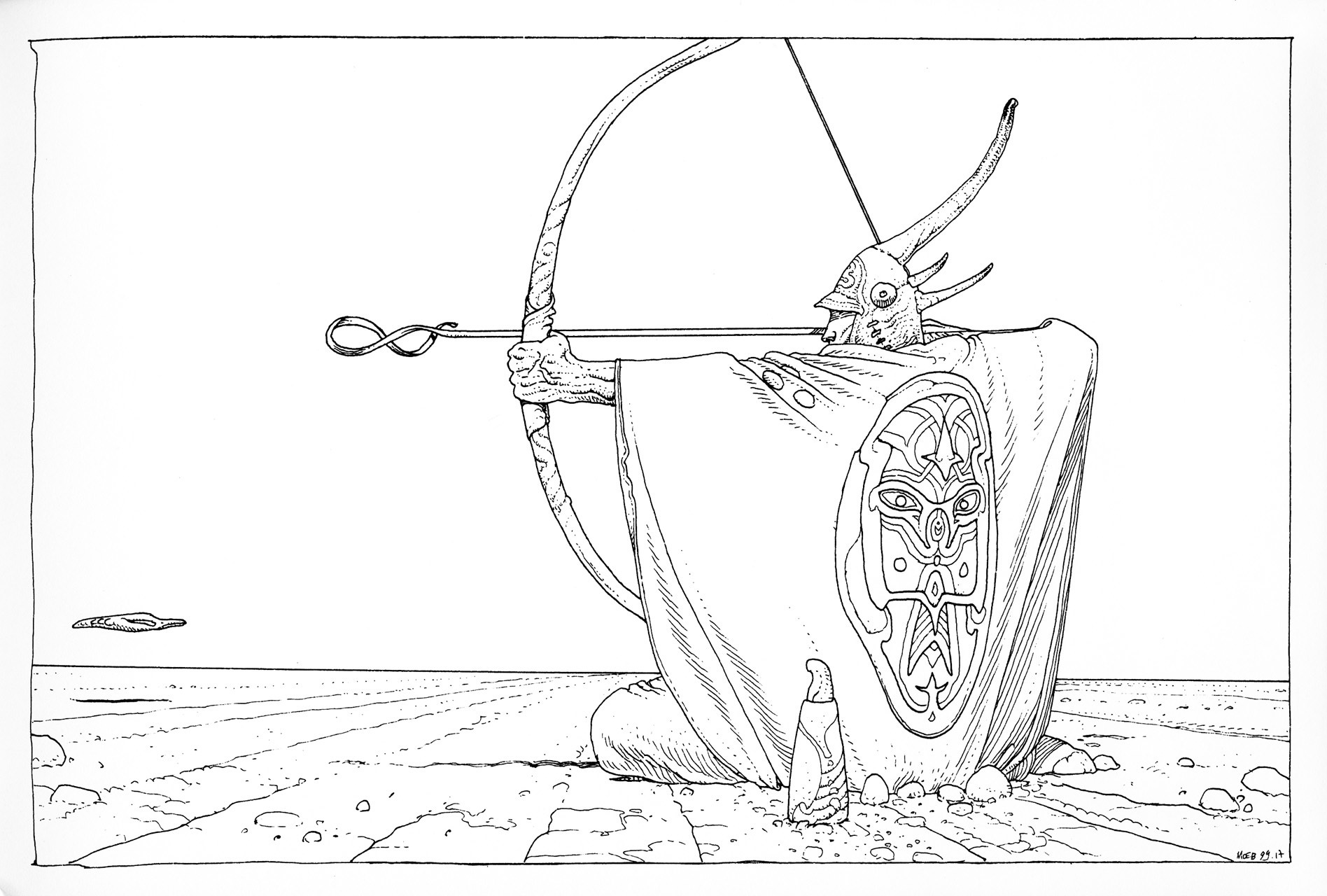 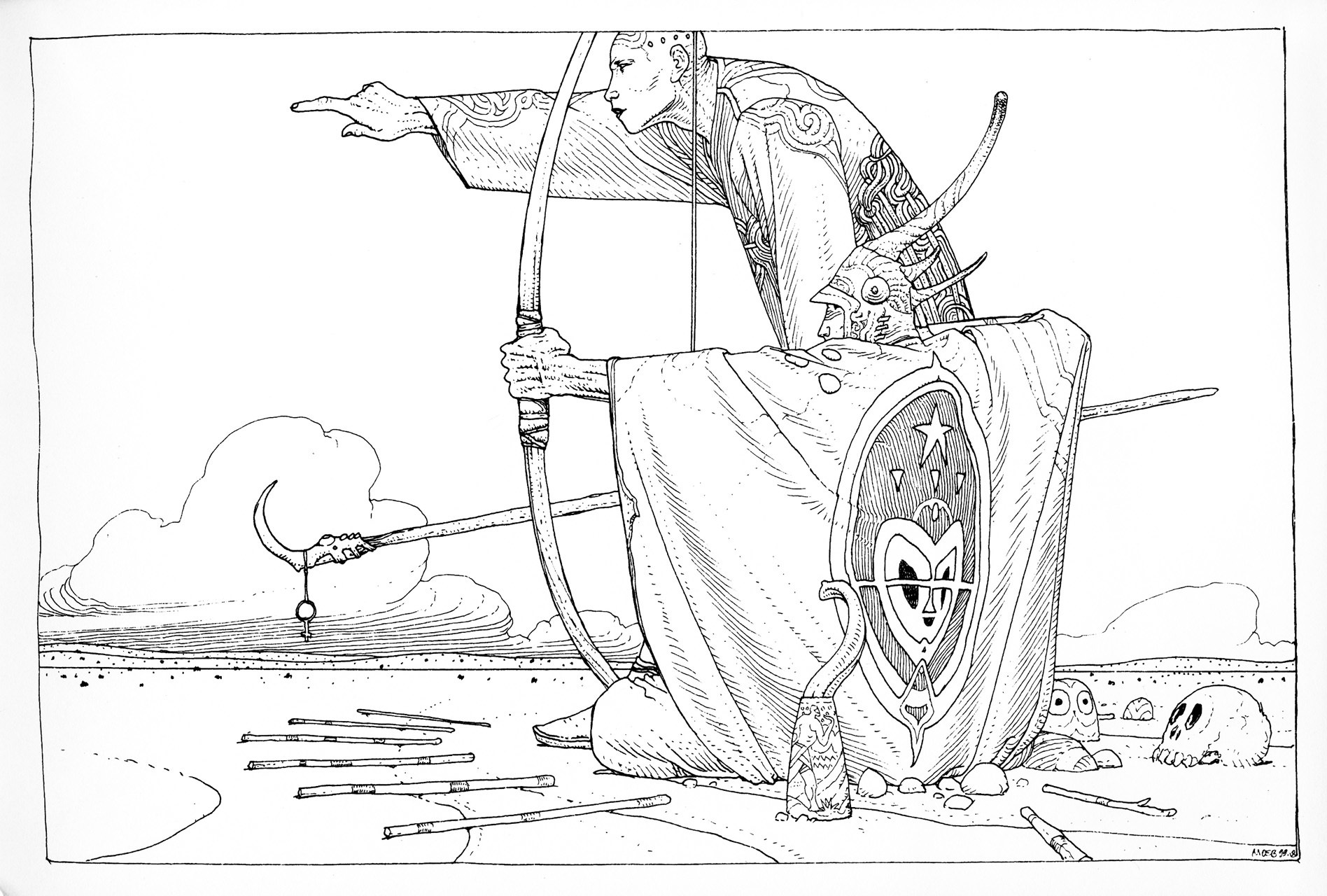 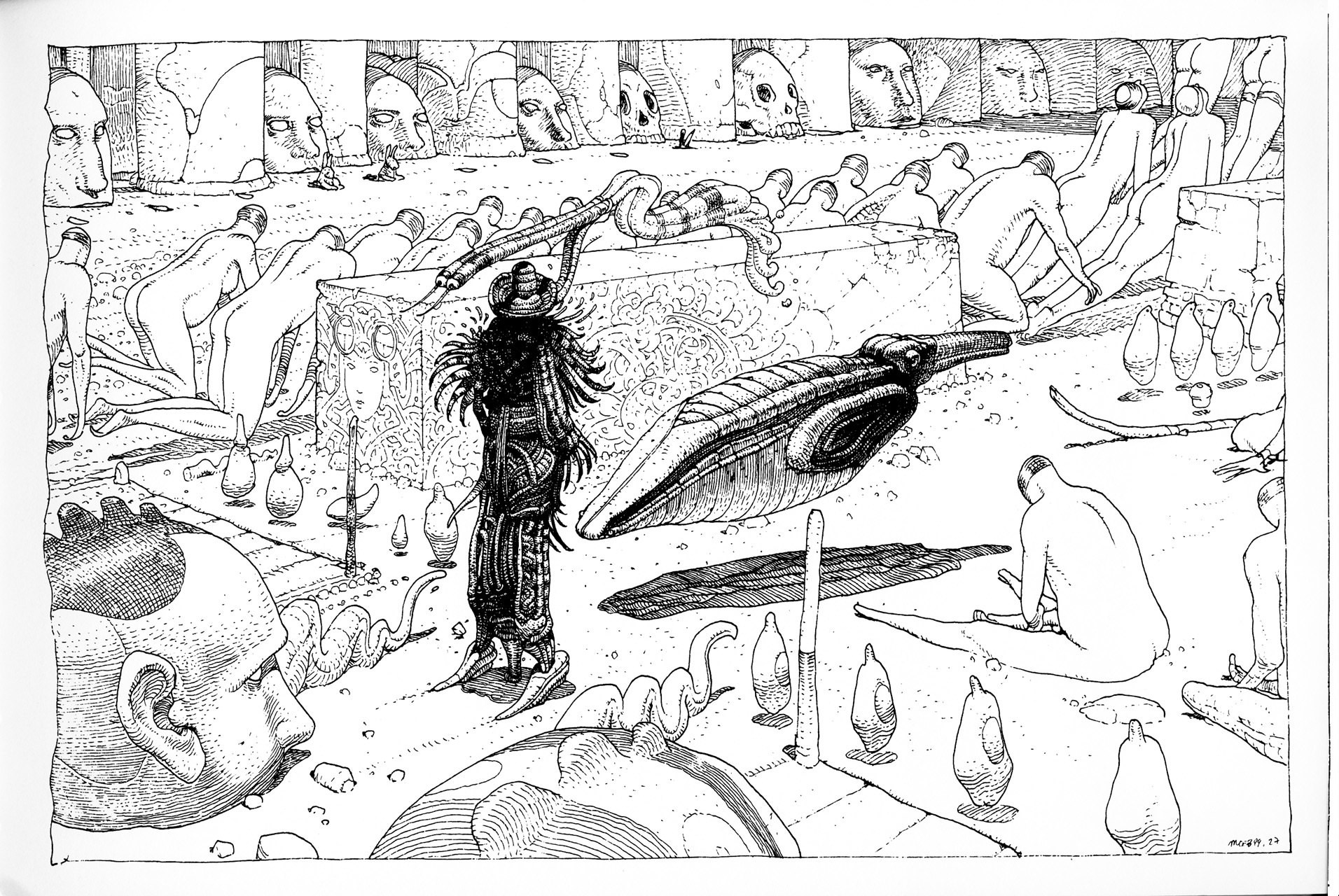 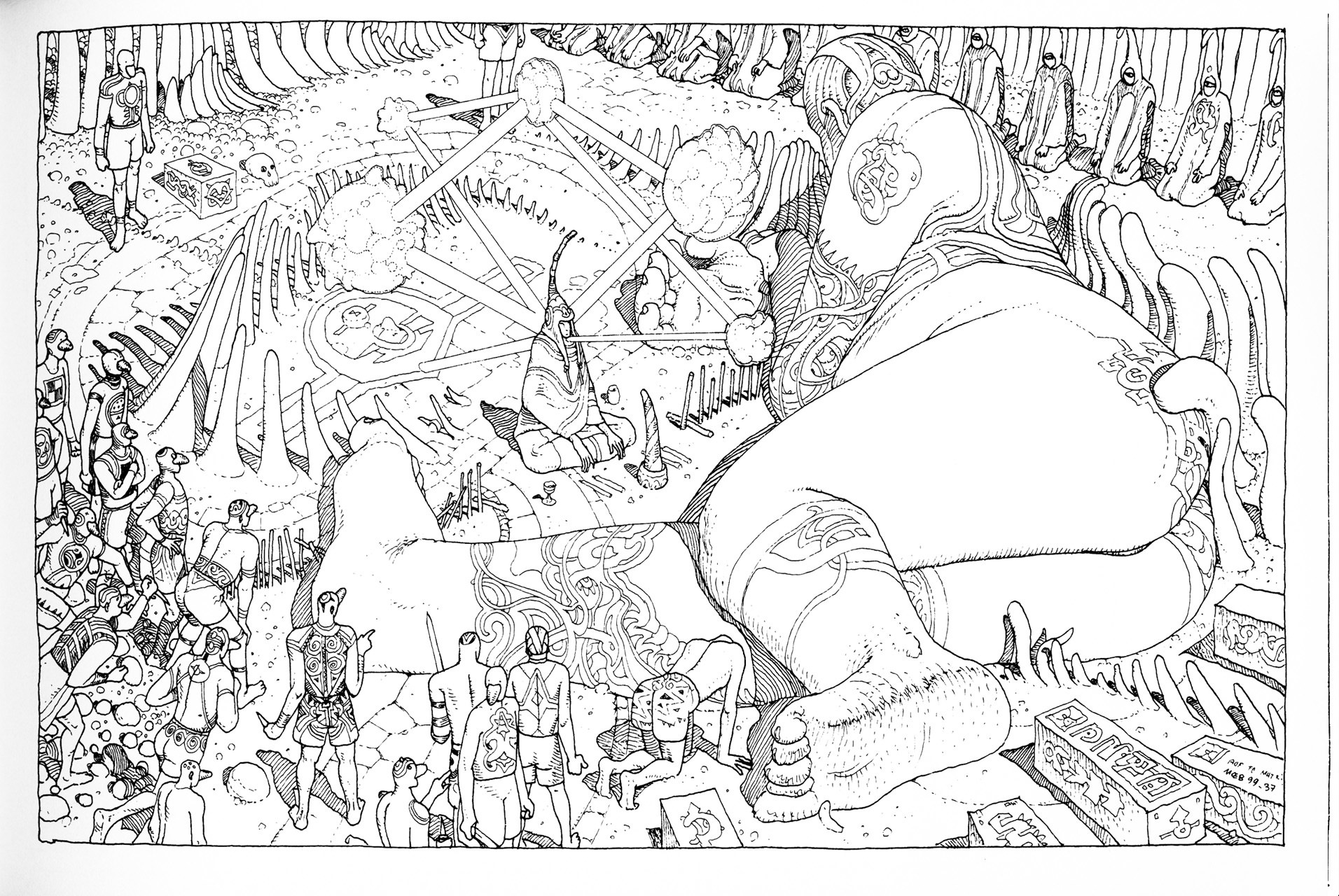 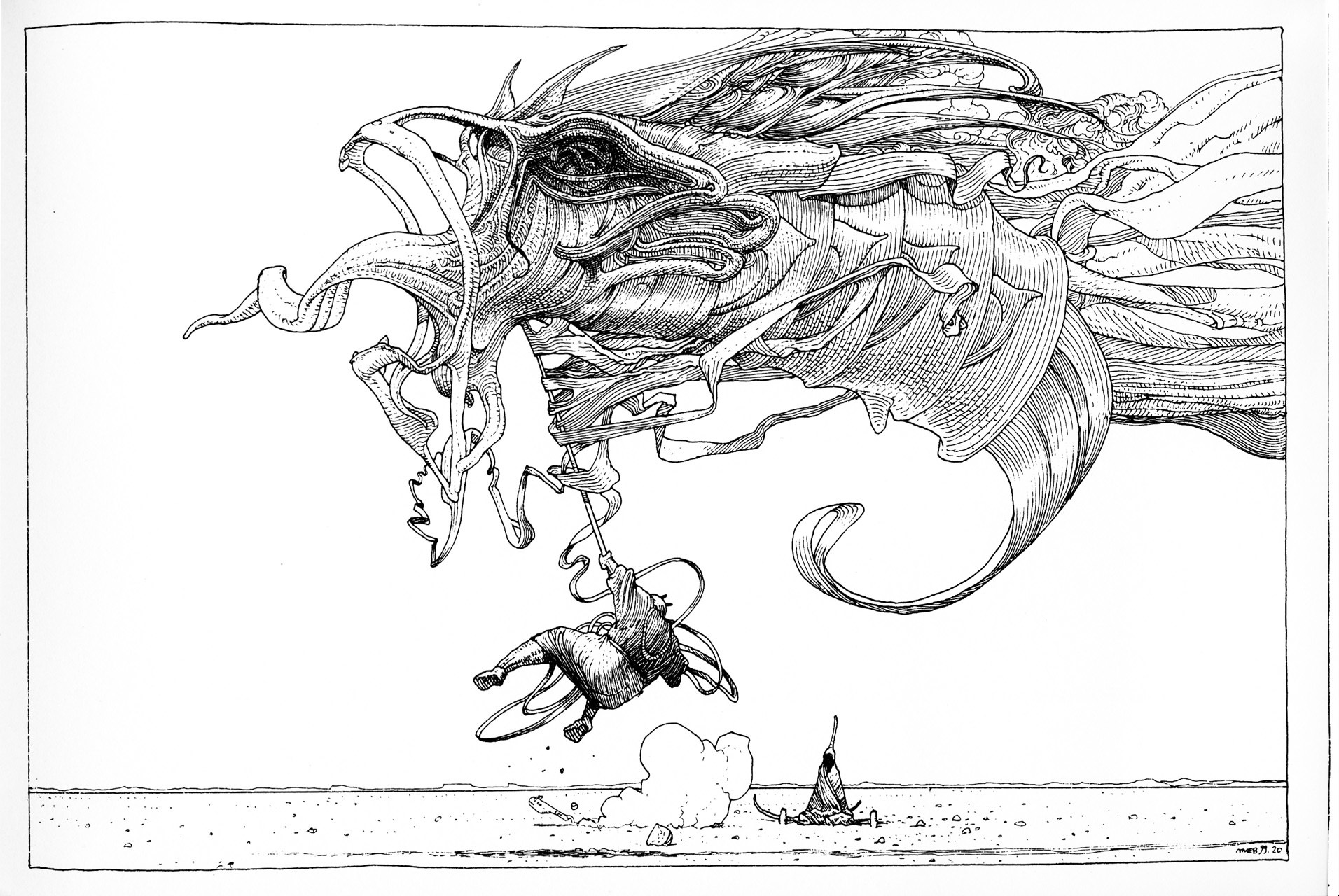 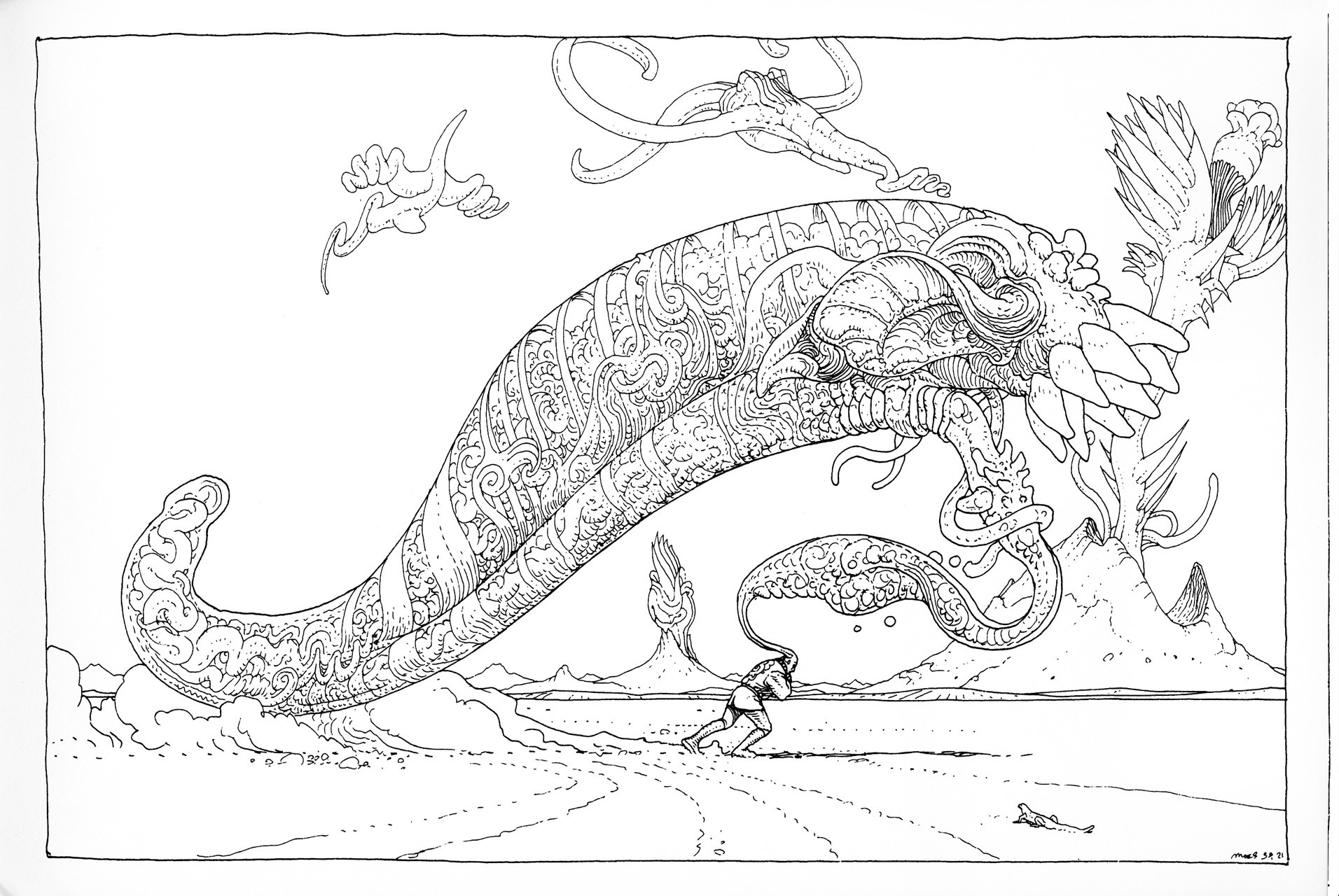 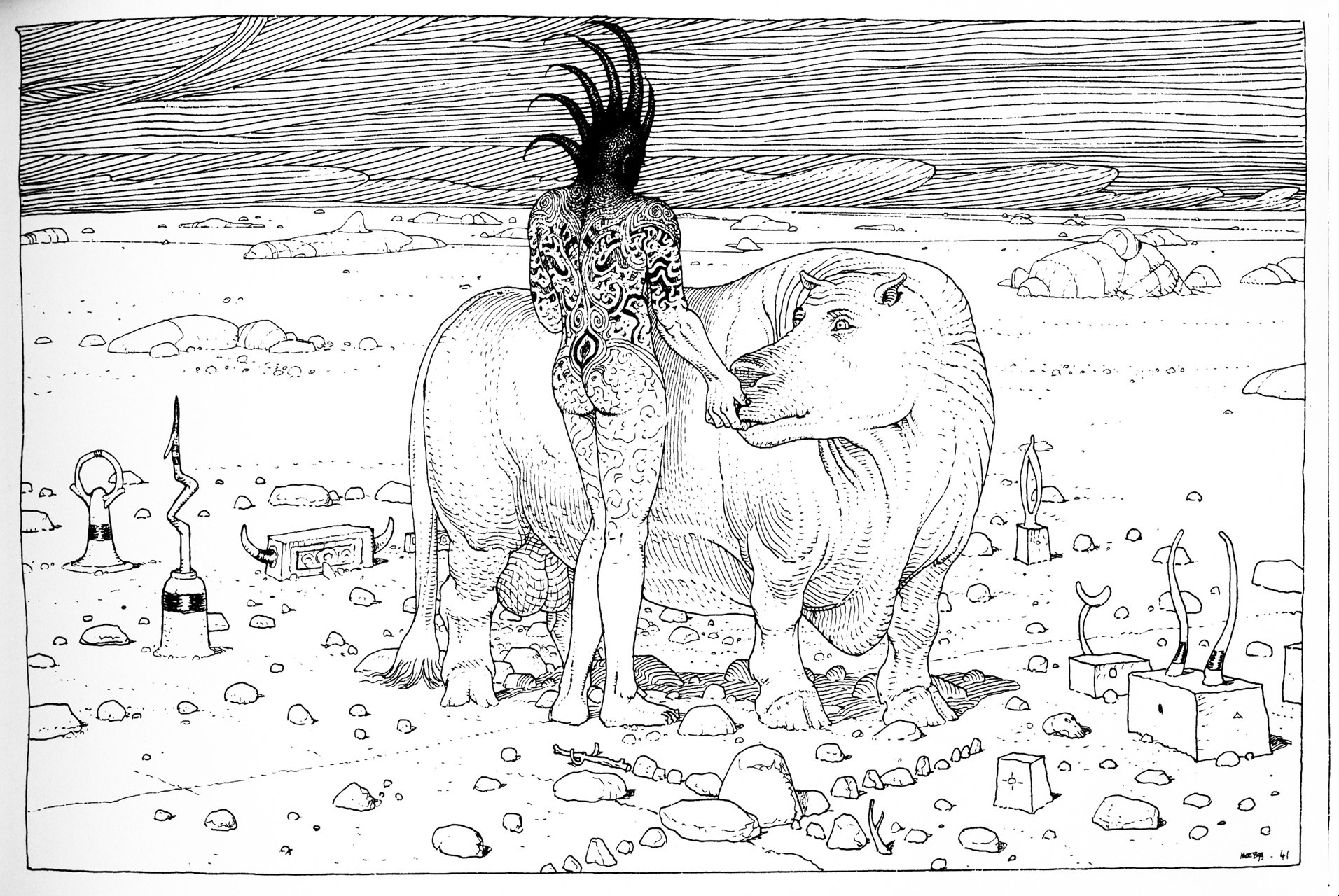 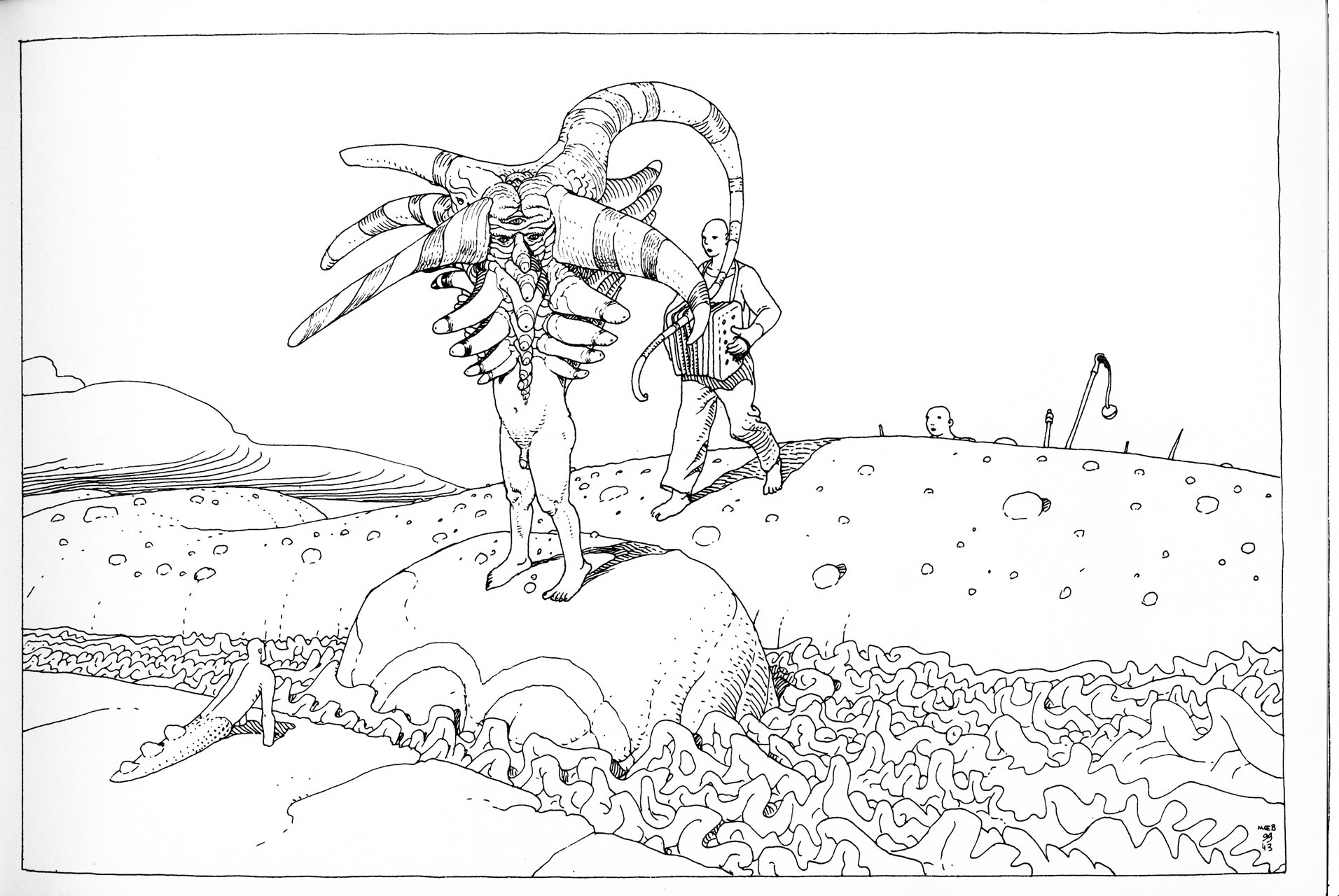 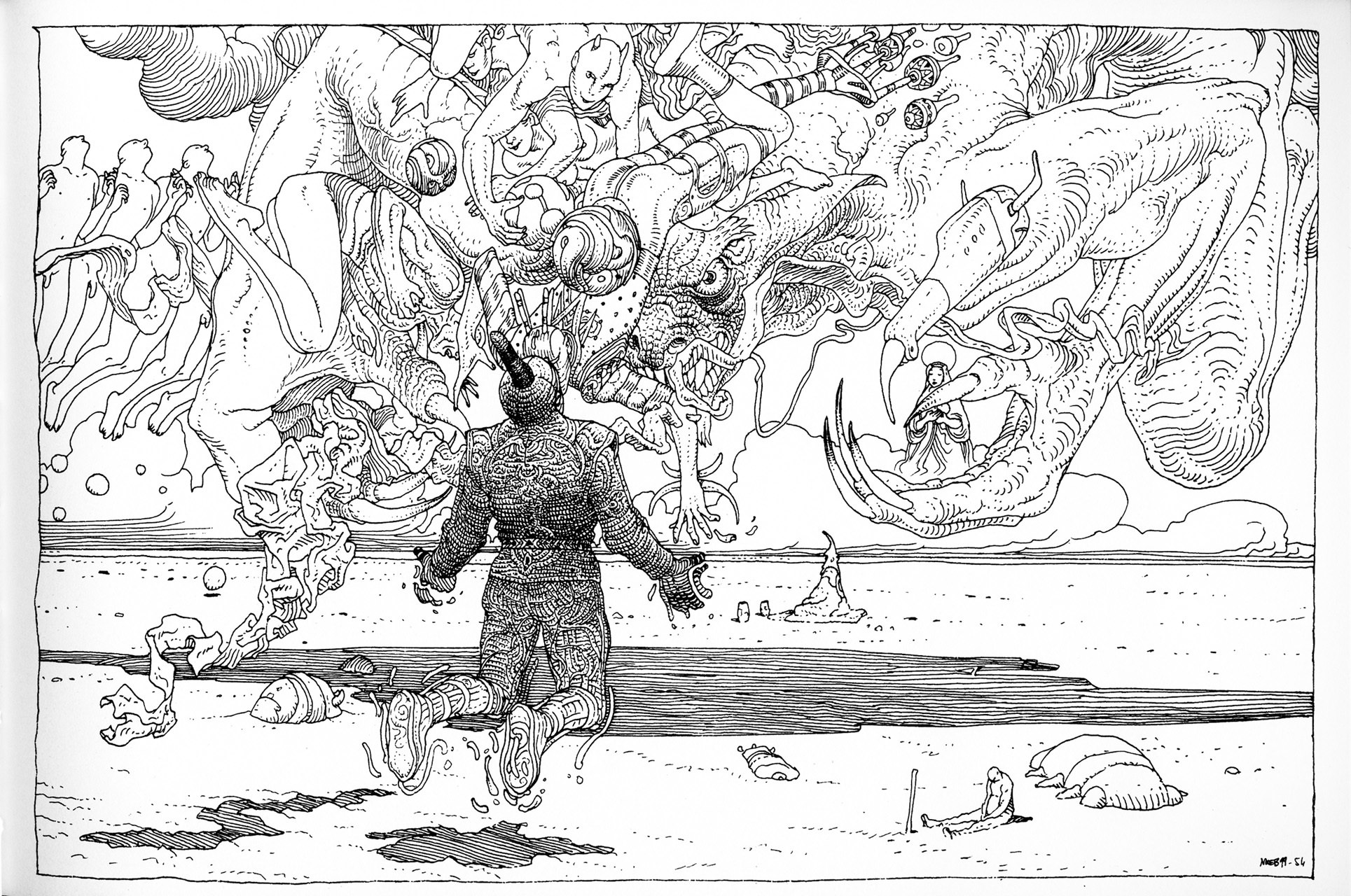 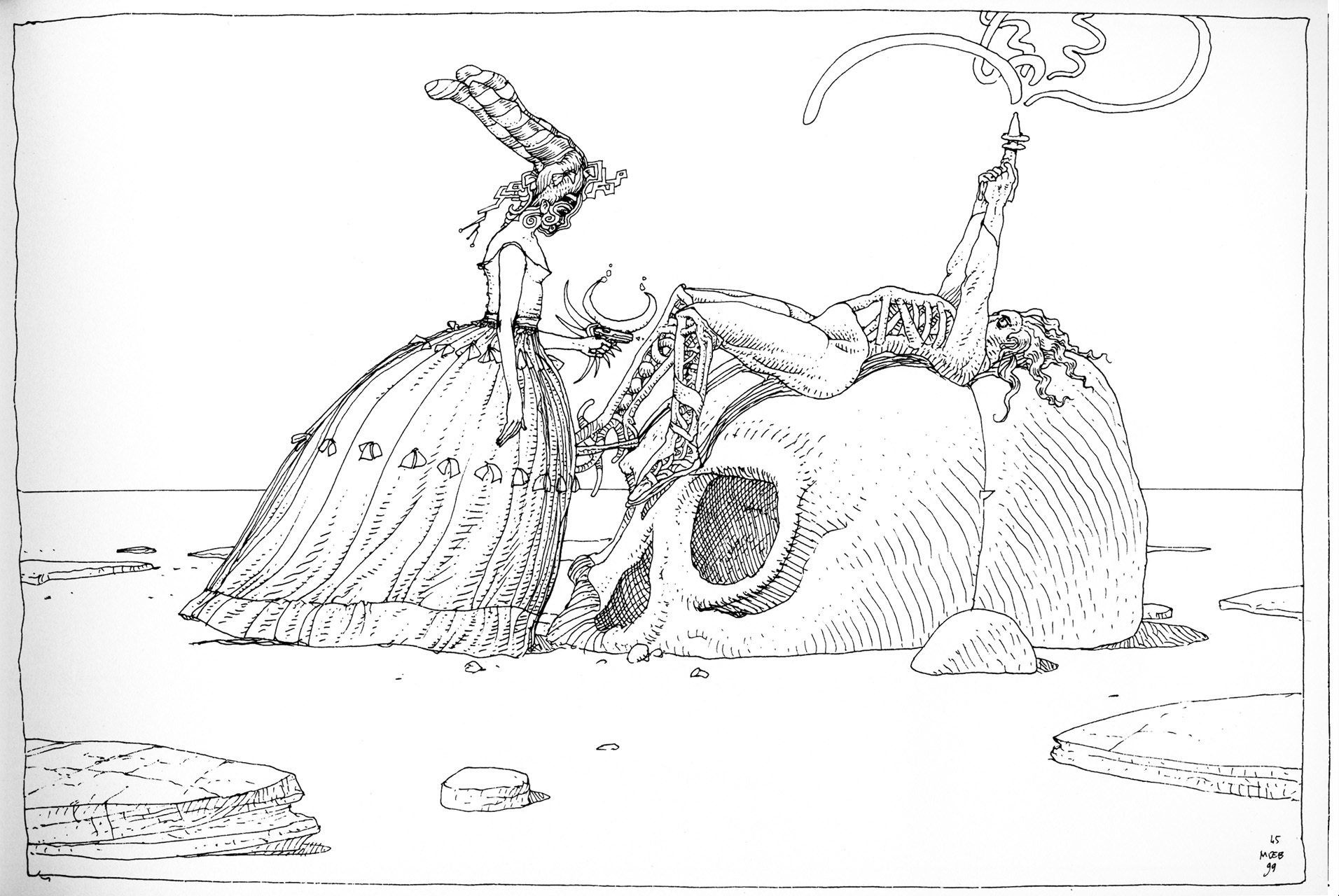 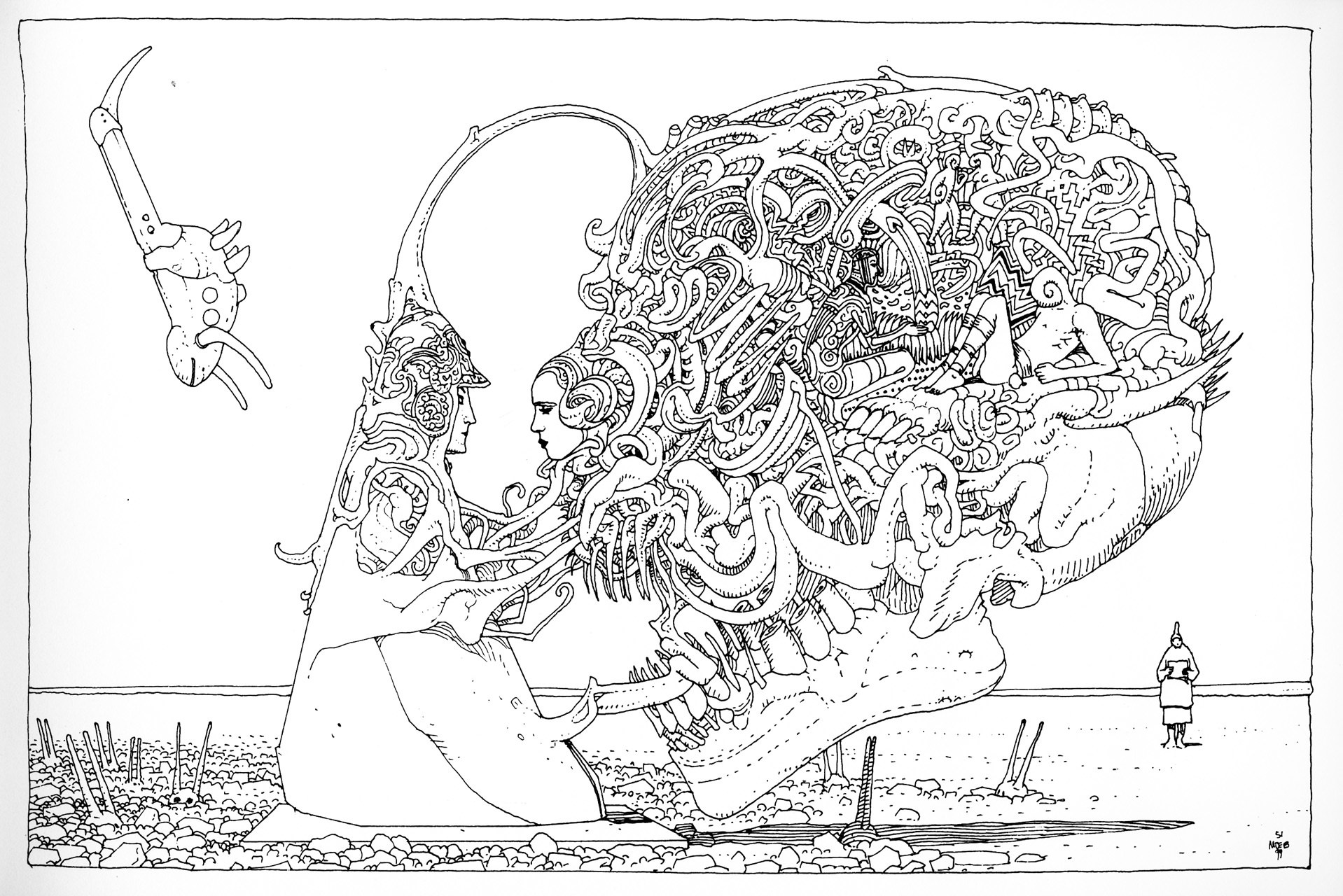 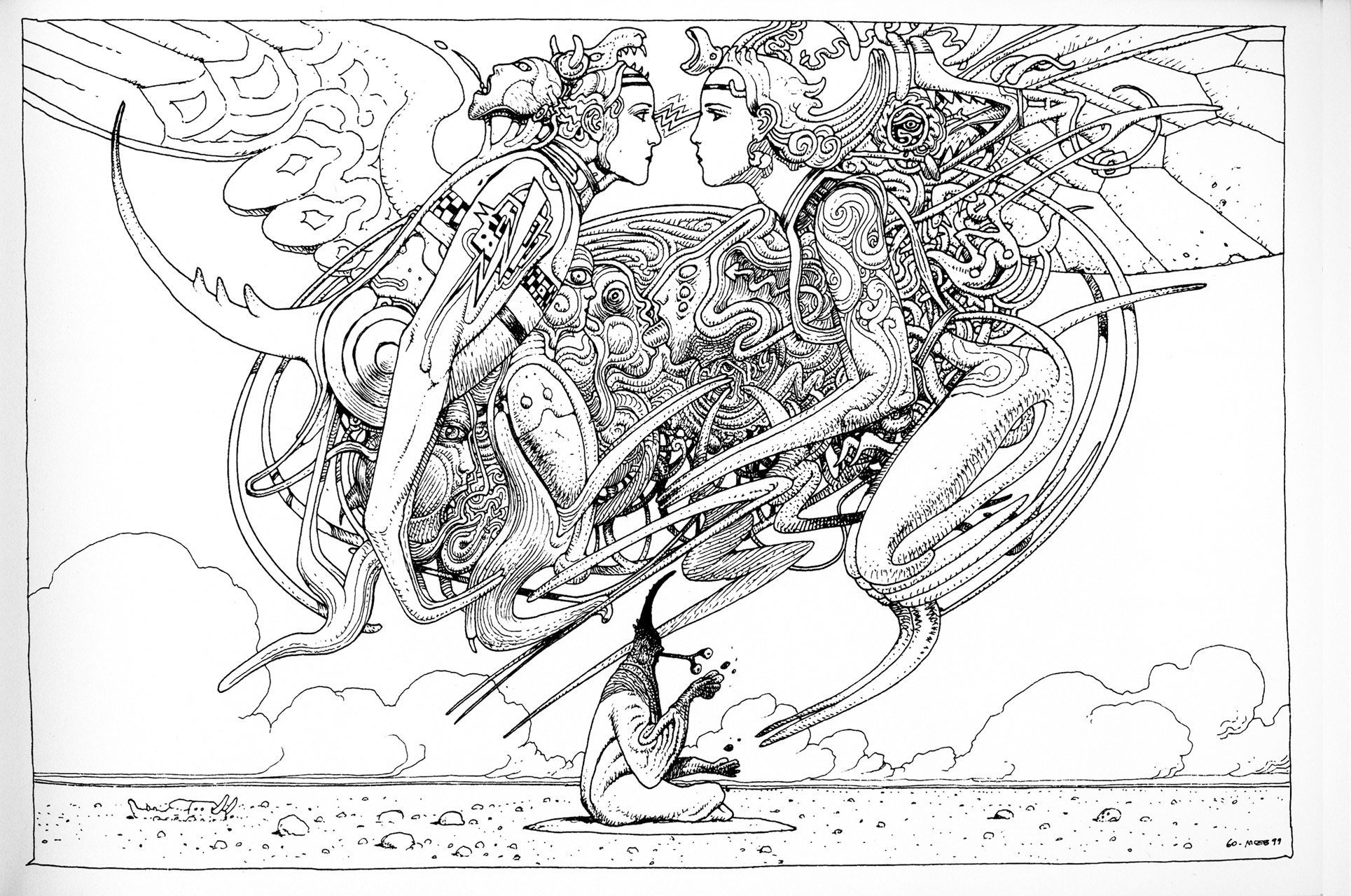 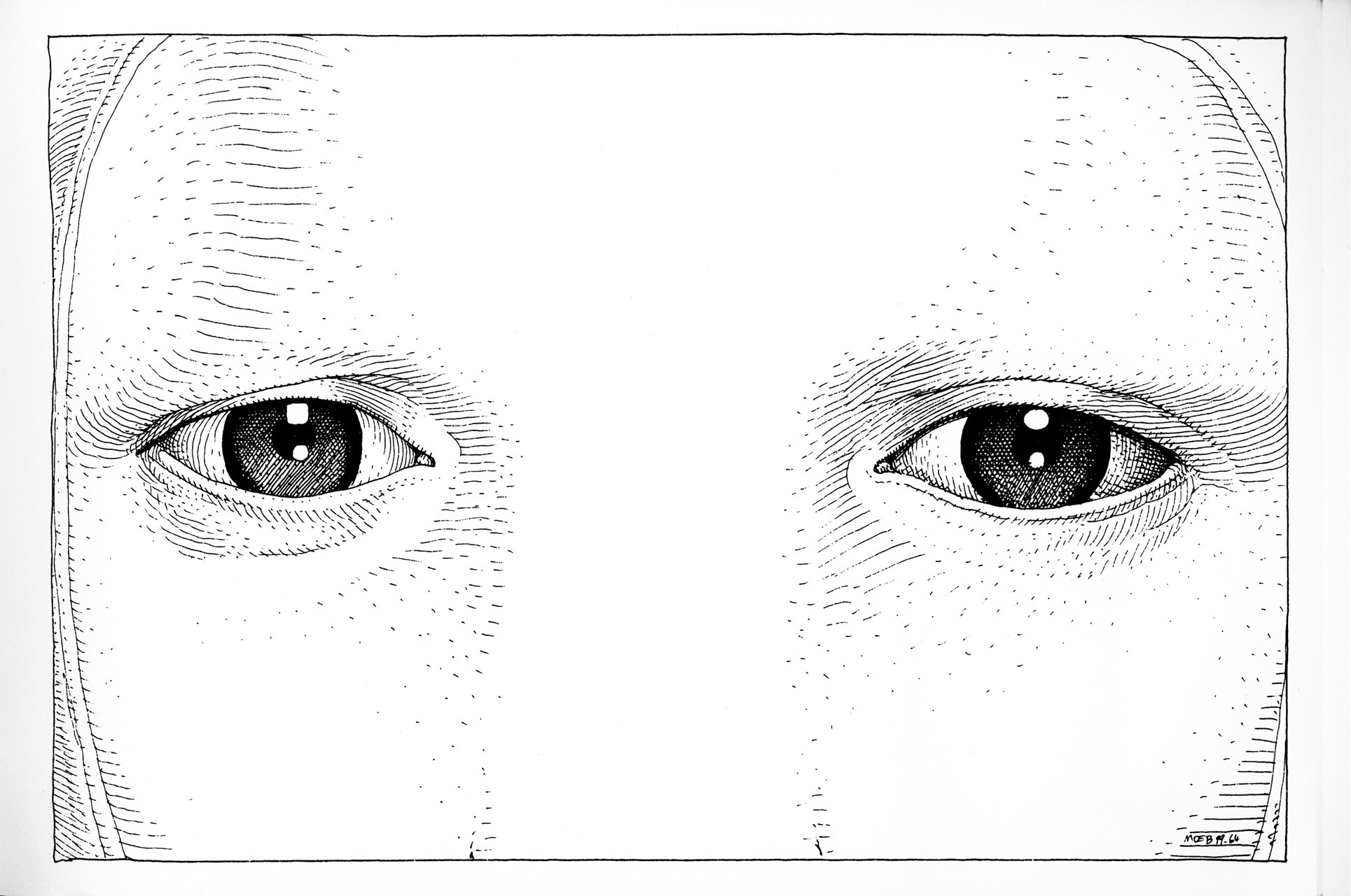