What would life look like without advertising? This is a question that seems almost unthinkable to us in a modern Western society. Where would we be without the the golden arches of McDonalds or CocaCola’s famous Christmas truck? Are we doomed to live in a world where even the world’s premier football league is sponsored by a bank, and the meerkat from the Go Compare adverts is more famous than any one of the Eastern European leaders? What would Piccadilly Circus or Times Square look like without their seminal giant billboards pushing customers to buy a Sanyo camera or Samsung TV? Well almost 10 years ago one of the biggest cities in the world decided to find out.

São Paulo, Brazil, is now the 7th largest city in the world with a population of just over 20 million people. In September 2006, Mayor Gilberto Kassab passed a bill called Lei Cidade Limpa (the “Clean City Law”) which outlawed the use of all outdoor advertisements. This was by no means a small scale operation. It wasn’t just limited to the giant Bladerunner-esque billboards that bombard us with Big Macs and cans of Coke in Times Sq. Virtually everything that was put in a public space with intention of selling a product was to be taken down: billboards, shop fronts, taxis, buses etc.

“People had become more and more aware that pollution in São Paulo was one of its main problems” Kassab describes, “and by pollution we not only mean air, water, or sound, but also visual pollution.” The issue of visual pollution was so prominent in São Paulo that within a year, around 15,000 billboards were stripped and all shop signs had to be scaled down or removed in order to avoid violating the new law. Even pamphleteering in public spaces had been made illegal. Fines, totaling somewhere in the region of £5m, were issued to rid the city of its polluted landscape.

Nine years on and the most important city in South America has remained free of the visual clutter that plagues the majority of cities around the world. Initially when the law was passed, it faced huge scepticism and there was an air of panic from city businesses and advertisement groups. Opponents were worried that the advertising ban would entail a loss hundreds of millions worth of revenue and over 20,000 people could potentially lose their jobs. Others argued that the city would turn into a bleak and desolate blend of concrete with the ads removed, which looking at some of the photos is quite understandable:

Dalton Silvanom, the one Councillor who voted against the law stated “I think this city is going to become a sadder, duller place […] Advertising is both an art form and, when you’re in your car or alone on foot, a form of entertainment that helps relieve solitude and boredom.” Perhaps unsurprisingly, Silvanom is businessman with ties to the advertising world, so he may not be the most impartial judge when it comes to the way adverts affect our public spaces. But there’s also a bigger issue at play here: can advertising be seen as art when it’s purpose is to sell the consumer a particular commodity?

German philosopher and critical theorist Theodor Adorno argued that “The triumph of advertising in the culture industry is that consumers feel compelled to buy and use its products even though they see through them”. In other words, we’ve been coaxed into a world where we knowingly buy products that we don’t need knowing full well that doing so will not contribute towards our happiness. So Adorno’s point here is that we cannot just view advertising as a passive medium that just brightens up our cities and breaks up our television shows. It is an active, aggressive form of capitalist propaganda that is a blight on our cityscapes and used like a drug to keep us addicted to consumerism.

The advertisements of Times Square

Karl Marx’s original statement that “religion is the opium of the people” may still stand true, but if religion is the opium of the people then, for the critical theorists of the 20th century, advertising has surely become our Heroin: a distilled and enhanced form of seduction that keeps us rooted in an ideology that we, as individuals, have no choice over. Indeed, the majority of adverts are not intended to inform us, or educate us, they are there to sell desire through dissatisfaction – visual media with such a goal, from Adorno’s perspective, can surely not be classified as art.

So, Silvanom’s argument that we should cling on to our over-advertised cities because they relieve boredom and provide us with enjoyment through their ‘artistic merit’ seems rather weak (at least from the above perspective). To imagine what life would look like without advertising maybe we should imagine a world where instead of CocaCola unashamedly telling us to ‘Open Happiness’ on the side of every London bus, we could see the work of an artist whose sole intention it was to produce something for the sake of the enjoyment of the viewer. Aesthetically I don’t think many would disagree with adding more and more art to the city’s blank grey walls. This could have an amazing cultural influence as well as bringing revenue into the city through tourism. It’s seems São Paulo is the only one of the world’s major cities that is on the right track:

One of the new street art pieces filling Sao Paulo

However, many smaller cities and towns throughout the world have been pushing to follow in São Paulo’s footsteps. A few years ago locals in Bristol, a city famous for it’s wide variety of street art (Banksy, of course being the most famous), instigated an online petition to get the council to ban all outdoor adverts. They called it ‘Bristol: the city that said no to advertising’. Similarly in the US, Vermont, Maine, Hawaii, Alaska, and a further 1500 towns across the country have placed restrictions on the amount of ads. Paris also recently decided to cut down their outdoor adverts by 30% and banned all ads within 50 meters of school gates. 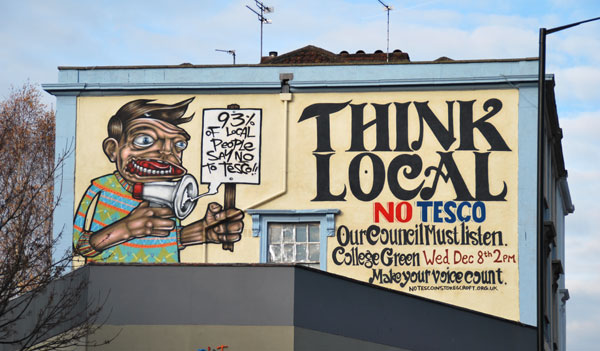 Now, in summary, I’m not necessarily advocating a ban of all adverts, in fact I do think advertising is somewhat necessary in some cases. However, I also believe that if we keep heading down this road it won’t just be football stadiums named after airlines that we need to worry about, everything could be bought or sponsored to sell us one product of another. So what would life look like without advertising? I doubt we’ll ever be able to find out but it’s encouraging that in São Paulo, and other places across the world, people are starting to take notice of it’s negative effects rather than just accepting it as an inevitability of city living. And if we don’t? Who knows, maybe we’ll be planning trips to iCalifornia or Samsung Seoul in the future.

4 thoughts on “What Would Life Look Like Without Advertising?”